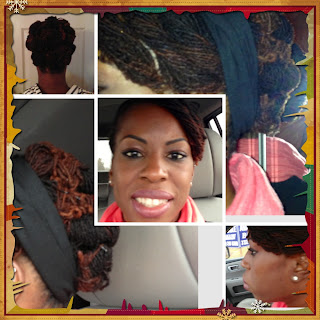 Playing around with my Locs I came up with this style. I sectioned out the left side front and twisted each piece and placed for a side sweep and pinned. I then took the right side and flat twisted to the back, with the remaining hair I twisted until the end and let it buckle. The same as you would with a Bantu knot but instead of tucking the end under I pinned it. I took the remaining hair in the back and twisted each piece and pinned it. This is what I came out with...to pull it in more I tied a scarf around it. This is good for numerous days and when I take them out I will have some body to my locks.
at 3:24 PM 6 comments: 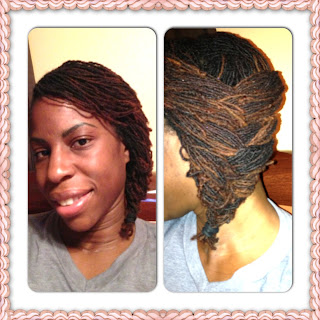 Playing around at home and came up with this. Good way to keep hair off my neck and face without the infamous ponytail or bun.
at 7:59 PM 3 comments: 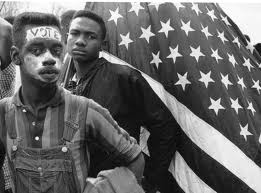 Our ancestors fought for the right to vote, no matter who you choose, CHOOSE and exercise your RIGHT!
at 10:24 AM No comments: 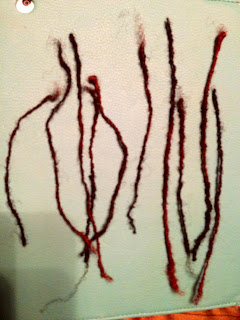 Thanks to Hurricane Sandy I was able to take my time and complete my retightening. As I went thru I snipped all my double head dragons. There were quite a few --- as I look at them here I love the colors as my hair grows.
at 6:01 PM No comments:

Last update my locks were shedding.  I decided to go to a consultant (not trainee) Denise Hair Loft for an assessment.  She trimmed my locks a bit for all the ends that were due to fall of anyway - nothing major and even them all out.  The culprit for my shedding ......shampoo's.  Now I've been flip flopping between quite a few shampoos but I was mostly using Carol's Daughter.  Although it smells yummy it was not conducive to my locks and started to break them apart.  What she suggested is to go back to the sisterlock shampoo in order to roughen my cuticles again.  I have done that since late August and I have seen a difference.  My locks are still shedding but by no means how they were.  Lesson of the story - KISS (Keep it simple st*p*d) :)

Now in addition to my assesment, she suggested that she can just straigthen out my parts a bit.  I thought he!! why not, sit and let a MASTER TRAINER do my hair.  ABSOLUTELY!! I made my appointment for 12 weeks out.  That meant for 12 weeks don't retighten my locks at all.  6 weeks went by and my locks were OUT OF POCKET!!! I had already gone 2 weeks between seeing her and my last retightening so I had 8 weeks of growth.  If you know me, I retighten every 4/5 weeks (and 5 is a stretch).  My locks felt like they were standing on top of my head and I could not even run my fingers through without snagging hairs, the only style I could rock was a bun.  I said enough and went in early for my appointment.  It took 4.5 hours just to do the front of my head!!!! Mind you my parts are now straight and lovely, but the price I paid and the time I sat hmmmmmmm.  I made my appointment to complete the back but the more I thought about it I said forget it -- it is what it is I don't have that type of time to basically do a re-install!! The funny thing is she said I had a lot of hair and thats why its taking so long.  Needless to say I'm glad I don't go to anyone to retighten because it would take entirely too much time and money to maintain on a monthly basis.

Here I am today, 4 weeks later after my front was retightened (not the back nor middle) and I have 12 weeks of growth in there.  It is quite a disaster -- as I retigthen I have been able to create some new locks, but I took it back to basics using clips and ponytail holders just to make sure I didn't snag any extra hairs.  Lesson of the story ----I'm sticking to a 4 week schedule from now on!

Whew....so as we always want to see are pictures right. Unfortunately I have no real hair shots. I have not been experimenting with styling and absolutley no color for a while.  My hair length isn't exactly where I thought it would be but I'm quite happy with it.  The worst part is that some of my locks shedding have left parts uneven (not cool) so I'm going to stick to the SL shampoo to seal the ends again and KISS going forward!!!

Compliments - Is it really?

Compliments -- ah yes those things. What is the best one you've gotten really?
I still get oh it looks nice like tiny braids, or I like that its really nice. 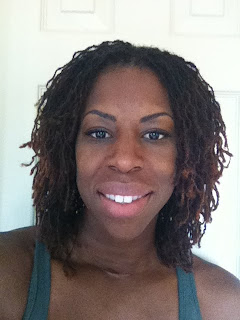 This is a mixture of a braid out and twist out in the front that I kept in for three days and took out. I'm not big on wearing my locks out because the left and right side are uneven and it doesn't have much of a style. This came out ok so I rocked it.

Lately my ends are shedding every time I pass my hand thru my locks or wash them. I realize I have been neglecting moisturizing my locks.

Back to deep conditioning and moisturizing.
at 8:24 PM 3 comments: 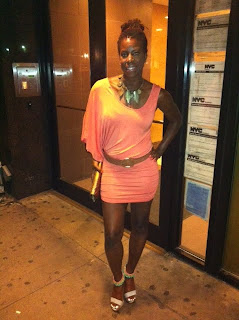 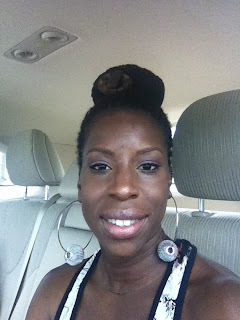 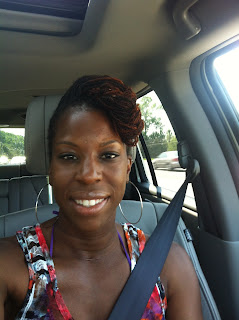 Here are two looks I've tried. As its heating up I mostly keep my locks up and to boot when they are down they have no style.

Picture one - I'm in badd need of a retighten look at all the fuzzies. Picture 2 - err where is my hairline starting? A mess.
at 9:33 AM 3 comments:

I love how the curls look different everyday but still has so much body.  I will be putting the lock loops in retirement becuase my curls have never last this long.

UPDATE:
It's Day 7 and I ran again on Day 6 and I still have tons of curls and bounce!! Pipe cleaners are the TRUTH!! 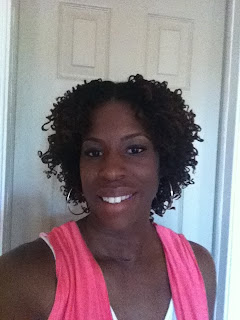 My first time trying pipe cleaners and I love the results!!!!!! I did not put them in on wet hair I used the crinkles and curls mousse and parted my hair into 6 sections to make it easy. Once I took them out I just separated the curls and this is what I have. More pictures to come!
at 7:31 PM 4 comments: 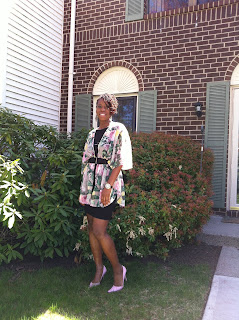 It's been a while since I posted but this is me on Easter. My sides are twisted to the back - think Mohawk. Then I twisted each piece forward and pinned it down. And left a bang (large section). I used my Caruso curlers for the slightly bent look.
at 7:05 PM No comments:

I saw these on You Tube and also on Blaqkofi's blog and I'm seriously thinking about purchasing them.  Do any of you have this and can provide your reviews/opinions on it before I purchase?
at 9:05 PM 8 comments:

Style of the week (front) 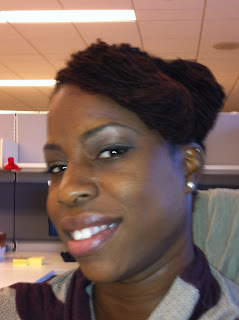 Here is the look I rocked for a week it was twisted on the sides and the back was in a bun.
at 6:51 PM 4 comments:

Style of the week (back) 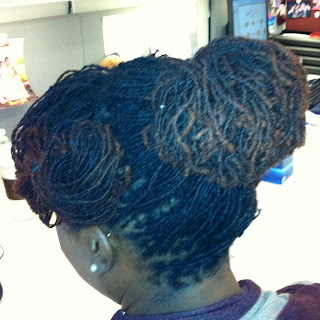 So days later after my hair has dried I noticed that the lint has not exactly been removed.  What has happened is that the lint traveled from the actual beginning of my lock (closest to the root) and traveled down to about the middle towards the tip of the lock.  Another round of this "solution" should hopefully loosen the lint enough for it to travel to the end and actually off my locks.  I will keep you posted.


Lately, I've been noticing more and more build up around the nape and front edges of my locks, can we say NOT THE BUSINESS!!!  I have not been diligent in really trying to pick it out with tweezers because I find it ineffective.  I just figure when I wash it will eventually come out.  So after basically being quarantined for the last 72 hours I've had some time on my hand.

I know YouTube has been out there for quite some time, but I have just really gotten into watching videos, tutorials and actually trying the things I see.  Well........let me say I just tried the BOMB loc build up removal. It was cheap, fast, and easy which is right up my alley.  Anywho the ingredients are:

I wasn't really diligent with the measurements but that's the idea :-).  To start off I cleaned out my sink not with bleach or anything just a good wipe down.  I started the tap water and poured all the other ingredients into the sink and filled my sink about 1/2 way with lukewarm water.

To begin I started with dry hair and I used an additional 1/4 cup of dry baking soda and sprinkled that on the trouble areas first - the back of my neck, the right side, the left side, and the remainder just on the ends.  After doing so I just dunked my locks into my sink and swished around a bit back and forth.  I found the water a bit cold so I added some warmer water.  I continued to swish around making sure my roots were actually in there I went so far to spin around in the sink so that I was staring at my ceiling.  I was more concerned with back of course so I used a cup to pour the solution onto the back.  When I was facing my sink I just used my hand.  Now I was in this "solution" for probably less than 5 minutes.  If you think about it its all drying products so I didn't want to overdue it.

Here is the color of my sink afterwards - with a disclaimer, I don't really use alot of oils in my hair or products!


After I partially dried my hair a bit really just to see if the particles had left. You can totally skip this.  I then jumped in the shower and shampooed with Herbal Essences clarifying shampoo to get anything I may have missed.  **SIDEBAR as I went looking for the link that shampoo is way too old for me to still be using that will be going in the GARBAGE!

I came out and immediately checked the back and seriously the lint is gone - I should have taken a before picture but you all know that lint starts build up and looks terrible!


My hair doesn't feel dry it feels as normal as it did before. But after closer inspection I see a few particles in the front and sides, I just finished a retightening where I may have gone too tight so I'm going to check back in a few days and see if its just from that. Either way this removal tactic will be used in the future when I have any build up.  I do already take a few precautions to avoid build up such as drying with an old t-shirt and not a towel I hope to avoid it all together.  If I can't I will be revisiting this! Try it you will love it!!

Just a few styles I've played around wiht since I have a bit more length -- thanks to you tube.  You can't really see the details but here they are

To all my fellow bloggers and followers!  Looking to make 2012 a great year in my personal and professional life and wishing you all the same. 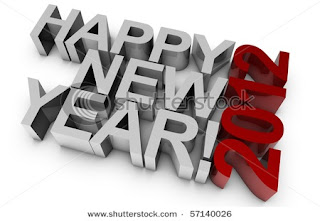