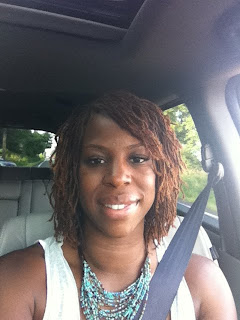 It's been a while since posted a picture of my hair down. So here you go. I'm long overdue to do a comparison shot but you get the idea. It has grown, lol!!!
at 10:13 PM 10 comments: 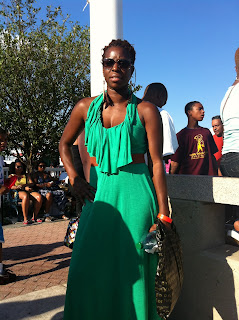 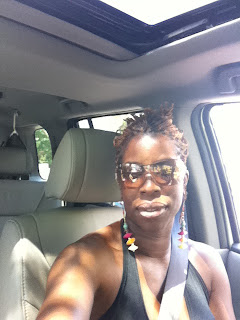 Here are just some random shost that I liked that my locks were truly effortless. They are pulled back because its HOT!!! and right after a retightening so my parts are on point. Excuse the expression, a fellow walked into my light!

Well it has certainly been a while....and yet I have nothing to say :-(

There is nothing really new with my locks, actually no thats not true.  I feel like the front area of my locks are unlocking based on that new product I was raving about in my last post.  It made my locks so soft which was a great thing but over time it felt like after every wash my ends were curly q's verse locked ends.  On top of that, every time I run my fingers thru my hair I can pull balls from the ends because they are literally handing on for dear life!  Since I don't use anything on my hair besides maybe once a week spritzing with a mixture of Carol's Daughter Tui Oil and water I figure the cause has to be the shampoo.  So I decided to go back to the sisterlock products.  I ordered the salon formula along with the green tea formula and I received it yesterday.  I haven't washed my hair yet, but I know it has to give me that hard rough cuticle I need again to continue the locking process.  Other than that, I truly haven't been styling a thing.  I pull my locks into a messy bunish/ponytail and go out the door.  I put some curls in the other day with lock loops but by the end of the day they were almost out, so why bother! And really isn't that the best part so I'm not complaining.  Unfortunately, I don't have any new hair pics although I'm infamous for taking car pics but I switched from the blackberry to the Iphone and instead of taking pictures I'm now consumed with playing words with friends!  Well thats all I have but I would like to know .....