Compliments! Its been a long time since we discussed them. Have you gotten any recently? Or do you still remember that one compliment given to you on a day you needed it?
at 10:33 AM 1 comment:

2 years of sisterlockdom! I can't say that the time has flown by because it does feel like a long time since I originally had my installation. On day 1 I really thought 2 years in I would have locks literally down my back, I DON'T :-). I thought that all my locks would be locked, can you believe they are not? The front (hairline above the forehead) especially, which has always been my problem area is unraveling a bit and breaking -- totally frustrated!!!!! Since the front isn't locked and its now breaking I am going back to braiding and banding that has to help. Or at least that's my thought anyway. The back is doing well all nicely locked and growing. In the back, one of my locks seemed to have thinned in the middle from me constantly pulling it into a ponytail and so it was longer than all the others. Yesterday when I reached looking for it I found it snapped off, I lost it somewhere who knows! Ah well, another one lost to the struggle.

Now, who would of thought you would read a 2 year anniversary post so negative. Although I'm having issues I would not have it any other way. All hairstyles have positives and negatives and I just want to chronicle it all, because its not all peaches and cream. I'm still fiddling around on what products I use, from the SL line to liquid black soap to Jane Carter, but it all depends on my mood. Moisturizer I switch up to from Carol's Daughter to a local oil I purchased. The one thing I'm going to try to refrain from this year is coloring my hair. I don't feel it has been harmful but it can't hurt NOT to color it. I'm going to go thru the spring and summer without coloring and see what changes that brings to my locks. All in all I'm still in love with my locks and don't regret the decision to lock with the sisterlock family!!!
at 10:01 AM 2 comments: 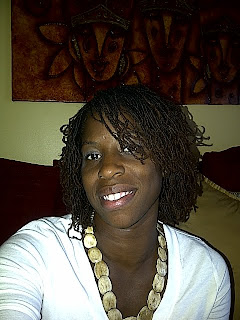 I'm almost 2 yrs locked,well I guess you can say I am because its tomorrow but I will put my thoughts to keyboard tomorrow with comparison pics!
Sent via BlackBerry by AT&T
at 4:51 PM 2 comments: